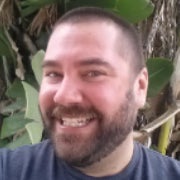 Brandt joined NoveList as a Senior Software Engineer at the beginning of December 2019. Prior to joining our team, he has found success working for Red Hat and Dude Solutions here in North Carolina as a Software Engineer II, and as a Lead Web Developer for Yardi Systems and QAD in California. Brandt has been developing commercial software for the Web since 1998, but laughingly will tell you that he didn't actually consider himself an "engineer" until around 2010 while developing internationally localized eLearning systems.

Outside of work, he enjoys jogging, hiking, dirt biking, BMXing, skateboarding (he broke his arm attempting a fakie nose grind on a quarter pipe, Thanksgivings weekend 2018!), just about every genre of music, and of course spending time with his young son, Dylan.