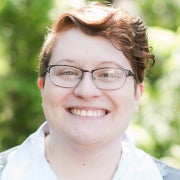 Jamie earned her Masters in Library and Information Science from the University of Illinois at Urbana-Champaign in 2016 and moved down to Raleigh shortly thereafter. She originally joined NoveList in early 2017 supporting NoveList products as a Technical Support Representative and joined the Book Discovery team in 2019. Her certification is in public youth services with a special interest in diverse literature initiatives and collections, but with her experience serving the tech support needs of librarians and NoveList users alike, she can also show you why your file isn't loading in a pinch.

Jamie's book preferences tend to lean toward the sci-fi/fantasy side, while carefully dodging all of the pitfalls and clichés that come with the genre. Diverse casts, cosmic horror, and robots are a major plus. She also loves graphic novels and nonfiction books about pop culture. Aside from reading she enjoys doing her own writing, listening to anything from Viking metal to embarrassingly cheesy 80s pop, playing video games, trying to keep her cats from eating anything that falls on the floor and catching up with as many Dungeons & Dragons podcasts as possible.

Posts by the author

Introducing new theme: Magical girls
How to Provide the Right Psychology Tools to Faculty: A Library Journal Webinar
New genre in NoveList: Manga to anime!
Geek out with our new NoveList theme: Fandemonium!