The College of Saint Rose 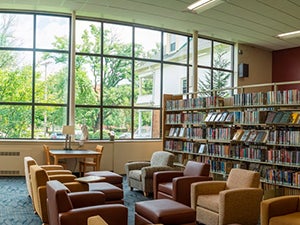 Located in Albany, New York, The College of Saint Rose enrolls 4,300 full-time students and offers a variety of on-campus, online and hybrid academic programs in the liberal arts. To support the research needs of students and faculty, the Neil Hellman Library maintains a collection of 250,000 volumes, 150,000 e-books and 120,000 e-journals. Recently, the library replaced its proxy service with OpenAthens, a SAML-based single sign-on access management system that offers greater security and flexibility.

Prior to implementing OpenAthens, the Hellman Library used an IP-based proxy service to facilitate off-campus access for students and faculty. However, over time, the cost increased significantly, and the library had to rely on the provider to make any changes or updates.

“If we had a problem with a password or a database, we had to go through a process of contacting their support, and they had to do everything,” said Collection Manager Peter Osterhoudt.

In addition, the usage statistics were not easy to decipher. “Basically, was just a flat data file, and you had to really know what you were doing to get anything of any value out of it,” Osterhoudt explained.

Furthermore, IP-based authentication methods are easier to breach than SAML-based authentication methods. After experiencing three security breaches in five years — one resulting in a temporary loss in access to some publisher resources — library leaders began looking for a more secure solution, one that offered an easy-to-use administrative console and built-in protections against account misuse.

Since the library already subscribes to EBSCO Discovery Service, Full Text Finder and many EBSCO databases, the decision to purchase OpenAthens through EBSCO was logical.

Set up was easy. The college’s active user directory is connected to OpenAthens, which means that library administrators are not burdened with creating new accounts or deactivating them when students leave or graduate. In addition, OpenAthens closely monitors accounts for misuse. For example, when an account signs in from different regions of the world within a short period of time, the OpenAthens system will automatically suspend the account and notify the administrator.

By a stroke of luck, the library happened to be setting up OpenAthens at the same time the IT department was implementing Canvas, the college’s new learning management system (LMS). Once users sign in to Canvas, they can access library resources without having to sign in again, and vice versa. Osterhoudt called the timing of the move “advantageous” and a “happy coincidence,” noting that orientation for incoming students went very smoothly.

“Users see the same login screen, so we’ve had far fewer questions [such as] ‘What’s my username and password?’” he said. “It really went better than I could have hoped for.”

Accessing usage statistics via the OpenAthens administrative module is also easier than ever. Right now, Osterhoudt is pulling only basic usage statistics, but he knows that he can obtain more detailed numbers if more data is added to ActiveDirectory. For example, he’ll be able to look at how many students in a given degree program are accessing library resources and other more granular data that will help inform the library’s purchasing decisions.

“I can log in as administrator and print out usage statistics in a matter of minutes,” Osterhoudt said. “It's much easier to do that with OpenAthens than it was with our proxy service.”

Ready to learn more about OpenAthens?