Skip to main navigation
The Fibonacci sequence and the golden ratio show how math and art are related in natural and man-made phenomena. 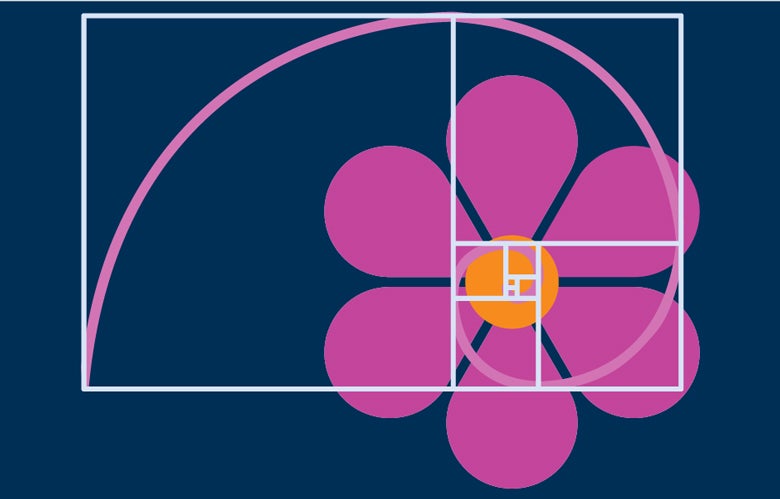 Also known as the Fibonacci Sequence, the golden ratio is a proportion based on a sequence of numbers in which each one equals the sum of the two numbers immediately preceding it. Named after Italian mathematician Leonardo Pisano, who was nicknamed Fibonacci, the sequence is 0, 1, 1, 2, 3, 5, 8, 13, 21, 34, 55 and so on. If you divide a Fibonacci number by the number just before it, you get the golden ratio of 1.618, which is represented by the Greek letter phi.

That is very interesting math, but what does it mean in the real world?
The golden ratio shows up in all kinds of natural phenomena but also in human creations like architecture and artwork.

Some examples of the golden ratio in nature are seen in the spiraling pattern of seeds in a sunflower head, the scales of a pinecone, the unfurling of a growing fern and the chambers of a nautilus shell.

The golden ratio shows up in some inanimate natural phenomena as well. The swirling pattern of hurricanes and the arms of spiral galaxies are just two examples.

Similarly, people make use of the golden ratio in architecture, as in the pyramids of Giza, the Parthenon, the Taj Mahal and the Guggenheim Museum. What makes these structures feel aesthetically pleasing are the golden ratio proportions of one section to another.

Fibonacci numbers and the golden ratio play a role in music as well, from musical scales to the foundations of chords to the harmonics created by ratios of frequencies.

Interestingly, another human creation — the stock market — exhibits surprising golden ratio characteristics. Investors can use charting techniques such as Fibonacci retracements, Fibonacci arcs and Fibonacci fans to inform predictions of price movements in individual stocks or for the stock market.

You can learn more about the Fibonacci sequence and other famous mathematical formulas in Academic Search Ultimate and Applied Science & Technology Source Ultimate databases from EBSCO.