Skip to main navigation
Learn more about the arguments for and against overdue library fines and ways to minimize the impact on patrons. 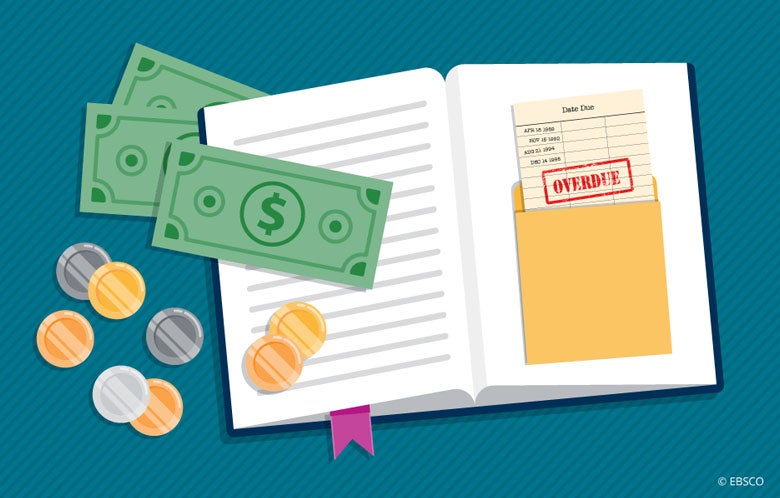 For more than a century, libraries around the world have been collecting money for overdue books and other borrowed items not returned on time. According to the Guinness Book of World Records, the world’s largest fine paid for an overdue library book was $345.14, the amount Emily Canellos-Simms presented to Kewanee Public Library in Illinois after returning a book she found in her mother’s house 47 years after its 1955 due date.

A January 2017 Library Journal survey revealed that 92 percent of libraries in the United States charge fines and fees. Overdue fines range from 17 cents a day to a maximum of $5 to $10 to cover the cost of replacement. Most libraries suspend borrowing privileges when fines reach the maximum threshold. In addition, libraries typically charge fees for printing, photocopying, faxing, scanning, 3D printing and replacing lost library cards. On average, fines and fees generate about one and a half percent of a library’s operating budget.

“We use the funds — $71,000 collected from fines annually — as part of our operating budget,” Jenny Paxson, a reader’s advisory librarian at Webster Public Library in New York, tells American Libraries. “Without them it would be difficult to run the library.”

Late fees have been said to encourage returns, thus putting library materials back into circulation for others to use. Some view fines as a small price to pay for breaking the library’s social contract — gentle reminders that libraries are providing a valuable service that should not be taken for granted.

“The charging of token library fines is a way to communicate to the public that libraries matter,” says Su Epstein, Library Director at Saxton B. Little Free Library in Columbia, Connecticut (Public Libraries Online). “Fines are a tangible reminder of the patron’s responsibility, the library’s importance, and the consideration of others.”

In recent years, however, some libraries have eliminated late fees for teen and children’s materials. Others are abolishing overdue fines altogether. The Urban Libraries Council has published an interactive map showing U.S. libraries that have gone “fine-free.” These include San Jose Public Library, Denver Public Library, Nashville Public Library, Columbus Metropolitan Library in Ohio, and the Enoch Pratt Free Library in Baltimore.

More and more library professionals contend that charging overdue fines undermines the mission of libraries to provide free and equitable access to information so that all citizens may educate themselves.

An informal poll of Library Think Tank Facebook page followers showed that most librarians are not in favor of charging overdue fines. Of the 526 who weighed in, 72 percent were opposed, 14 percent were in favor, and the remaining 14 percent believed fines should be waived for children’s and/or teen materials only.

Why go fine-free? More and more library professionals contend that charging overdue fines undermines the mission of libraries to provide free and equitable access to information so that all citizens may educate themselves. They argue that fines are a barrier to access, especially for low-income families, and can create adversarial relationships between customers and library staff members. Even worse, patrons who are ashamed of their overdue fines or financially unable to pay them may stop using the library entirely.

Sarah Houghton, director of San Rafael Public Library in California, tells American Libraries that fines are especially discouraging to “those in the community who could most benefit from library services.” She argues that the library’s role is not to teach personal responsibility, as some might suggest, but “to encourage lifelong learning, exploration and innovation.”

Dawn Wacek, Youth Services Librarian at La Crosse Public Library in Wisconsin, agrees. In her 2018 TED Talk, A Librarian’s Case Against Overdue Book Fines, Wacek says libraries support their communities by promoting early literacy among children of every socioeconomic background and by offering enriching programs, job-skills training, and resources to help business start-ups. She believes that charging fines counteracts this good work. Some libraries are allowing patrons to “read away” their fines or donate canned goods in exchange for late fee waivers, but Wacek says this alternative doesn’t help patrons who struggle with literacy or depend on food pantries.

“Why would we continue to operate under a model that hurts our most vulnerable patrons?” Wacek asks. “If our libraries are truly for everyone, they have to get rid of fines. Books have power, information has power. And for the powerless in our communities, being able to connect to that is even more important.”

These views are now shared by the American Library Association (ALA). At its 2019 Midwinter Meeting in January, the ALA passed a resolution calling monetary library fines “a form of social inequity” and urging libraries “to scrutinize their practices of imposing fines on library patrons and actively move towards eliminating them.”

As your library examines its policy on monetary library fines, here are two ideas for minimizing the impact on patrons in the short term: