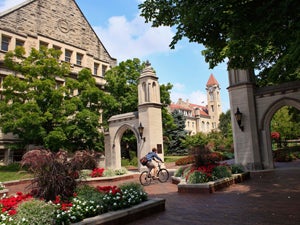 One of eight Indiana University campuses across the state, Indiana University (IU) Bloomington offers more than 180 majors and 330 undergraduate degree programs, as well as more than 190 master’s, doctoral, and professional degrees. The institution’s Herman B. Wells Library is the center of a multi-library system that serves roughly 40,000 students and 3,000 faculty members. Its collection includes more than 7.8 million books and bound journals, 800 databases, and 60,000 electronic journal titles. In addition, the library provides access to more than 500,000 eBooks. To surface more of its content, IU-Bloomington sought a more robust library research tool that would integrate all of its resources and function with the speed and simplicity of a commercial search engine.

With the implementation of EBSCO Discovery Service (EDS), called “OneSearch@IU,” IU Bloomington succeeded in making its rich library collection more easily accessible. In addition, the library plans to use the EDS API to create a more seamless interface that both maintains its institutional branding and further caters to user expectations.

EDS is giving us the opportunity to offer to our population of users the breadth and depth of content that we’d never provided before.

IU Bloomington’s libraries have long used “IUCat,” an online library catalog shared among all of IU’s eight campuses. The IU Bloomington library system—which includes 13 libraries across the campus—also implemented a federated search in 2005, and began using WorldCat Local in 2008. Subsequent usability studies revealed that researchers were generally unhappy with the catalog interface.

“We have a really large and rich library catalog collection,” explained Courtney Greene, Head of Digital User Experience at IU Bloomington. “We wanted to give people a sense of the breadth of the content that we have through a straightforward user interface that offered a single search as a starting place for both sophisticated and unsophisticated researchers.”

In addition to creating a more user-friendly interface, the library sought to bring relevant content to the surface more quickly and efficiently. In the past, for example, conducting a known item search was especially challenging.

“Our difficulties with known item searching stem from configuration decisions that were made in our catalog indexes,” Greene explained. “Expanding the fields indexed for the title search to meet certain needs for particular groups also had the effect of making a known item title search less effective when searching across the entire database.”

The library also provides access to materials in 70+ languages and, in some cases, these other languages rely on non-Roman scripts, such as Cyrillic and Arabic. Since the library has catalog records that include information both in English and in the vernacular, users weren’t always able to find what they were looking for.

“There was a lot of dissatisfaction,” Greene said, “and we didn’t have the ability to address the concerns that people had.”

Finally, IU Bloomington wanted a library search tool that would leverage web services, such as the EDS API, to enable seamless integration into existing library and campus web sites. For example, Greene said, the library would like to more fully integrate its content with Sakai, the open-source learning management system that the University uses to facilitate academic collaboration.

The research platforms that IU Bloomington had tried in the past did not allow the library to achieve these goals, Greene said. So when EBSCO Publishing approached IU-Bloomington library leaders in 2010 about becoming a beta partner in testing EDS, they welcomed the opportunity.

“The ability to search across all our content and our catalog was really attractive,” Greene said.

“INSPIRE,” Indiana’s Virtual Library, has had a long-standing relationship with EBSCO, so many school students and residents of the state were already accustomed to using EBSCO databases. IU Bloomington library leaders were pleased that they would be able to leverage this existing familiarity with EDS. Following successful user testing with students, faculty, and library staff during the trial period, IU Bloomington moved forward with the implementation.

Greene said that the library purposely took its time to implement EDS. “We had a lot of data cleanup,” she said, adding that the library catalog had more than seven million records to sift through. “We wanted to make sure that when we did launch, we had something that worked exactly the way that we wanted it to.”

The library web site features a search box at the top of the home page where users can enter a search term. Once on the search results page, users can immediately access full-text results generated by OneSearch@IU, or browse additional resources, such as subject databases and e-journals.

The EDS API allowed Greene and her team to brand search results pages so that each displays with a consistent look and feel. The font size is maintained, and active links are crimson, which (along with cream) is a University color.

“Another thing we really liked about EDS was that, while there was programming and development involved in integrating the API, in other regards the set up was not technically intensive for us,” Greene said. “At the time of implementation, the Digital User Experience department was new and relatively small, and we really didn’t have a lot of development resources to dedicate to that project.”

Greene noted that the library plans to do more enhancements with the EDS API once a redesign of the library website is complete.

In terms of access, IU-Bloomington uses EZproxy® to authenticate remote users, who must enter their university credentials to search library resources from off-campus. In addition, students can access OneSearch@IU on their mobile devices. These options work seamlessly with EDS.

Following the launch of OneSearch@IU, the library held instruction sessions for reference librarians who were then charged with training students and faculty. Incoming freshmen learned about the library’s resources during orientation at the start of the semester, and the library also offered a session on OneSearch@IU as part of a series of workshops aimed at graduate students.

To promote the library research tool, each of the campus’s thirteen libraries hung posters and distributed flyers describing the features of OneSearch@IU. The best publicity for the tool, however, has come by word-of-mouth.

“A lot of library school students work for us at the reference desk, and they’ve really taken to it,” Greene said. “They’ve been a really enthusiastic user group.”

Since implementing EDS, the IU-Bloomington library website has experienced a tremendous increase in usage. Before EDS, the number of searches each month rarely hit 500,000. In October of 2012 alone, the number of searches was more than 5 million, representing a 1,000 percent jump. In addition, users are accessing more full-text articles than ever.

“We’ve received some really positive feedback,” Greene said. “A lot of people say they use it.”

Initially, Greene wasn’t sure whether all researchers would be on board with the new tool, since many are accustomed to doing research in ways already familiar to them. But she has been pleasantly surprised.

“[EDS] is giving us the opportunity to offer our population of users the breadth and depth of content that we’d never provided before,” she said.

Greene said she has been most interested to learn that several of the library’s subject specialists now demonstrate OneSearch@IU over any other tool. Confident that their students are able to access relevant content, subject specialists can now focus on helping them to synthesize the information they unearth.

“That was huge for us,” Greene said. “I didn’t know people would adopt it in that way. Different disciplines have certain ways that they approach things, so I wasn’t sure if this was something that would appeal to folks who are expert researchers, but they seem to really like it.”

Greene said EDS is the first place she goes when she needs to research anything. “I use OneSearch@IU more than I use any other single database,” she said. “It makes it easy to get a snapshot of what’s available.”