University and City Library of Cologne 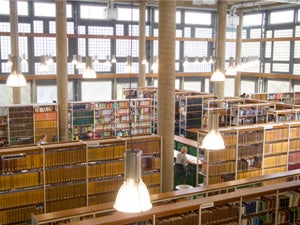 The University and City Library of Cologne is the central library for students attending the University of Cologne, as well as the citizens of Cologne, Germany, and surrounding towns. Officially founded along with the University in 1920, the Library contains extensive physical collections, some dating back to the 15th century. Special collections cover subject areas such as business studies, social sciences, insurance studies, the European Union, the culture of Belgium and Luxembourg, and Rhineland regional studies. With 560 databases, 70,000 online journals, and 23,000 eBooks, the Library sought to make its electronic resources more accessible to its 44,000 users. Using the EBSCO Discovery Service (EDS) API, the Library easily integrated EDS content, features, and functionality directly into its library portal. Since implementing EDS, the Library has streamlined the search process and surfaced more content from its licensed databases, further assisting researchers and securing a greater return on investment.

We attached great importance to the fact that the entire content of the most-used databases are included in EBSCO Discovery Service.

Dr. Peter Kostädt, head of Information Technology, said library leaders had three main objectives in their effort to enhance the library’s search platform: to create a more robust platform that would quickly access the library’s electronic resources through a single entry point, to increase use of the library’s licensed content, and to simplify the process of collecting of usage data.

In 2009, the University and City Library of Cologne launched a web portal that integrated its search, browsing, and order services on a single platform. However, hyperlink-structured pages created frustration among users who had to contend with changes in layout and navigation every time they switched applications. Kostädt said users could not consolidate bookmarks or account information because there was no data exchange, and they would often need to re-enter their login information to access each separate interface.

As a result, the Library sought to streamline the search process for users by creating a strong library research platform that offered the speed and ease of a commercial Internet search engine.

“Federated search is too complex and too slow for the students of the Google generation,” Kostädt explained, adding that a single search box on the library’s homepage would cater to user expectations.

The lack of variety in search results also posed a problem, Kostädt said. In addition to searching the library catalog, the portal provided a meta-data search of about 150 subject databases and union catalogs. Statistics gathered in 2010 showed that 97 percent of searches returned results from only the library’s catalog; a mere three percent returned results from subject databases.

Finally, the Library desired an easier way to search and gather usage statistics for all of its electronic resources. Kostädt said that simplifying the collection of this data would enable the institution to make more informed purchasing decisions.

Not long after launching the library’s web portal, Kostädt and his team began looking to implement a discovery service. The group gathered data about the Library’s collection usage and determined its objectives and functionality requirements. They then called upon three vendors – including EBSCO – to demonstrate their discovery products.

Kostädt said that the team chose EDS because it supports the search of both bibliographic data and full-text, offers response times of less than three seconds, and provides exceptional API access.

“Since we have licensed a lot of EBSCO databases, it was pretty clear from the beginning that we [would] end up with EDS,” Kostädt said. “We attached great importance to the fact that the entire content of the most-used databases are included in the Discovery Service.”

In November 2010, the Library tested the beta version of EDS through EBSCO’s partner program, which allows libraries to demo EDS before making a decision. The Library officially launched EDS in July of 2011.

Kostädt said the University Library has had a very good experience working with EBSCO’s implementation specialists and customer support representatives. “Many questions ran through our contacts in Germany, who have always responded very quickly,” he said.

Using the EDS API, the Library was able to integrate directly into its portal and customize a user interface that maintained the University web site’s look and feel, including their design of a prominently featured search box on the Library home page.

The EDS API is accessible by HTTP-REST and SOAP protocols and returns data in XML or JSON format. “Extensive documentation of the API is provided on the EDS Wiki, so we found it very easy to integrate EDS into our local library portal,” Kostädt said.

Remote users can access the Library’s search platform by logging in to the library’s web portal, through a Virtual Private Network (VPN), and from mobile iPhone and Android devices.

After implementing EDS, the Library promoted the product via email and RSS feed, Kostädt said, adding that the feed is also posted on the Library’s Facebook page. Since the library search interface is now more user-friendly, Kostädt explained, the Library did not feel it was necessary to offer formal training. 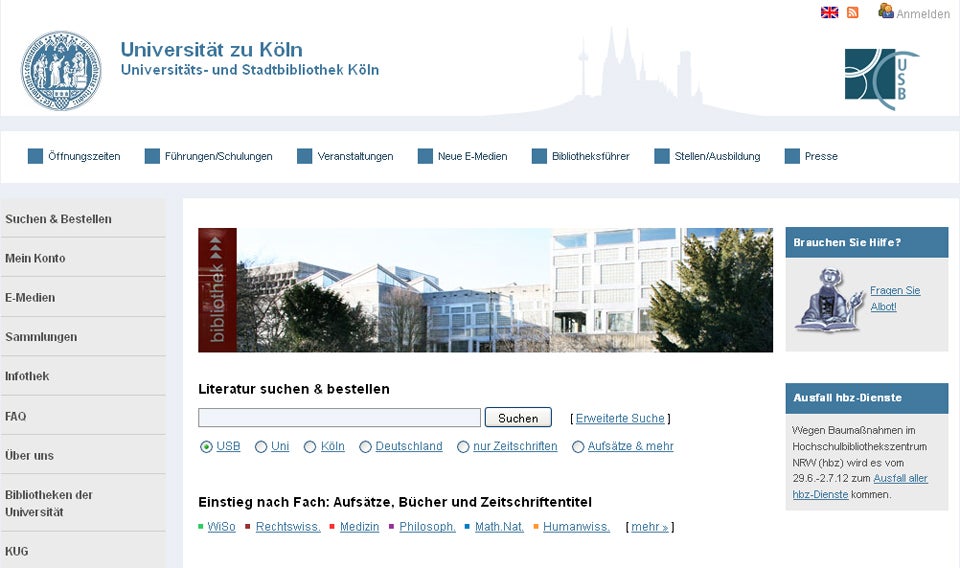 Since implementing EDS, library usage is way up, Kostädt said. Figures show that the number of searches in the library’s subject databases has increased by almost 300 percent.

Kostädt said the most popular EDS feature is the full-text limiter. “It is clicked in 10 percent of the searches,” he said.

To measure the extent to which users are satisfied with their EDS results, Kostädt counted the number of clicks on search results (to retrieve a detailed record), full-text articles, and the link resolver button (for inter-library loan).

“The results are very good,” Kostädt said, adding that, in the first half of 2012, the library experienced 150,000 searches including 45,000 clicks on full-text articles. “We’ve concluded that our users are satisfied with both the relevance and the currency of the EDS content,” Kostädt said.

Users have praised the simplicity of using EDS.

“EBSCO’s Discovery Service impresses me greatly,” said one student. “I am currently writing my final thesis, and the literature search via EBSCO is a lot easier.”

A member of the faculty agreed, saying, “The discovery function is very useful to me and to my colleagues. We use it frequently.”