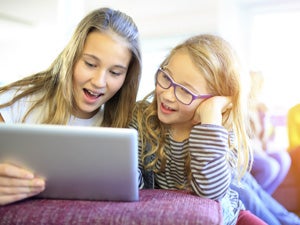 Pioneer Library System serves a population of 350,000 residents in a three-county area south and east of Oklahoma City. In 2015, to meet patron demand for online content, the library system implemented Flipster®, EBSCO’s digital magazine solution. Now patrons are able to access their favorite magazines on their preferred devices anywhere they have access to the Internet. In addition, use of Flipster in the first few months was four times higher than use of the library’s previous digital magazine vendor.

We looked at everything that was out there. Flipster was so much easier to use.

According to Virtual Library Coordinator Adri Edwards-Johnson, users were encountering a number of barriers when trying to access digital magazine content through Pioneer Library System’s previous solution. For example, at the time, the previous product required library card holders to set up an account, something separate from their library card number and PIN. They had to log in to the vendor website to browse the collection and then again to download a title. In addition, Edwards-Johnson said, users disliked the vendor-provided app because it was geared toward a consumer market rather than a library audience. By default, readers were directed not to the library’s titles, but rather to potential titles they could buy.

“We knew, with the feedback we received from magazine readers, there was a demand for a digital magazine service,” Edwards-Johnson said. “The challenge we faced was that the product we had was not delivering the easy library experience our end users expected.”

To solve this challenge, Edwards-Johnson and her colleague, Head of Collections Jennifer Marshall, began evaluating other digital magazine vendors.

“We looked at everything that was out there,” Edwards-Johnson said. “Flipster was so much easier to use.”

The reasons for selecting Flipster as the library system’s digital magazine provider were three-fold, Edwards-Johnson said. Flipster’s vast title selection, its ease of use, and flexible technology were key differentiators.

First, Flipster offers a wealth of popular magazine titles, such as People, Rolling Stone and Us Weekly. Pioneer Library System also subscribes to a number of children’s and tween/teen titles — such as Lady Bug, Boy’s Life and Seventeen — and a variety of titles that appeal to people with niche interests, such as HGTV Magazine, Cooking Light and Motor Trend.

Second, Flipster is easy to use. Patrons have the option to download a magazine title or read it right in their browser. In addition, single sign-on capability means that once patrons log in to the library website, they don’t have to log in again to access Flipster.

“Our patrons are able to get the services our library provides,” said Edwards-Johnson, adding that Flipster is device-agnostic. “They are not dependent on a certain OS to access Flipster. They can get to it from anywhere they have access to the Internet, which is really huge.”

Finally, the fact that EBSCO will be able to integrate Flipster seamlessly into the library’s internally developed mobile app was a major factor in their decision.

“We knew we wanted to develop this app to create a unified experience for our end users,” Edwards-Johnson said.

Pioneer Library System launched Flipster in February 2015. An email was sent out to library patrons letting them know that a new digital magazine service was coming. The library has also promoted Flipster using LibraryAware, a web-based tool from NoveList®. LibraryAware makes it easy to incorporate library content into social media posts, image carousels, and printed marketing materials, such as flyers, brochures, and bookmarks.

Since Pioneer Library System circulates its print magazines, not all titles are available on the shelf at all times. Using LibraryAware, librarians have created shelf-talkers, notices posted on the library shelves, that let patrons know that the magazines can be accessed online via Flipster.

In addition, Edwards-Johnson said, librarians have used LibraryAware to create reading maps pointing patrons to titles that might interest them. 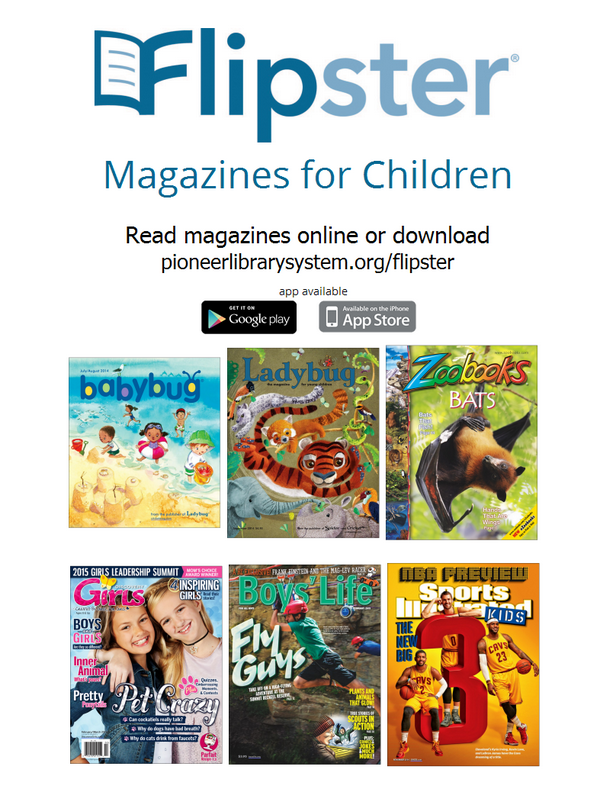 The library has also gotten creative on social media. A recent Facebook post encouraged patrons who enjoy needlecrafts to check out patterns in Crochet! and Knitting, two titles available on Flipster. 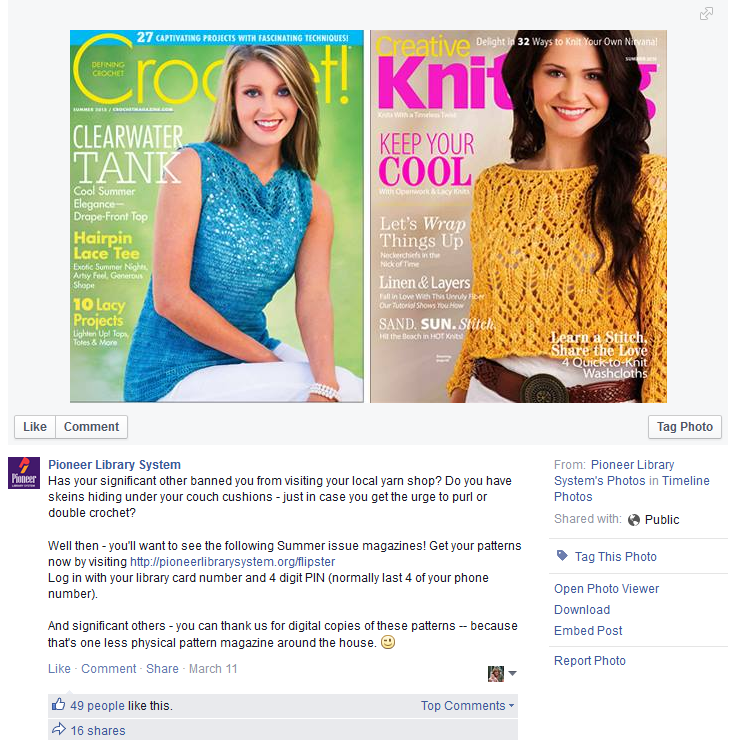 “Occasionally, I post stuff on social media from my mobile device to show how you can access Flipster from anywhere,” Edwards-Johnson said. On a recent trip, she noticed a magazine end-cap in the airport featuring a variety of titles. She snapped a picture and shared it on Pioneer’s Facebook page. “Every single title they had in the airport we actually subscribe to through Flipster.”

In the first four months after launching Flipster, the library saw more than 6,000 online views and more than 1,200 downloads. On average, Edwards-Johnson said, library patrons are using Flipster four times as often as they used the previous product. She has also been hearing a lot of positive feedback from members of the community.

“I was at a meeting,” she explained, “and one of our city managers came up to me and said he was so excited we got Flipster. His spouse actually cancelled their home subscription to a particular title and started reading it regularly on Flipster instead.”

“We look forward to the ease ECM will provide as we expand our Flipster collection,” Edwards-Johnson said.