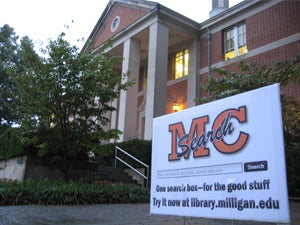 Milligan College, founded in 1866 and located in northeastern Tennessee, is a Christian liberal arts college that offers thirty academic majors, as well as masters degree programs in Business Administration, Education, and Occupational Therapy. Emphasizing scholarship, community, and faith, Milligan College aims to educate its 1,200 students to live meaningful lives through leadership and service. Milligan is currently one of four schools in the Appalachian College Association (ACA) that has implemented EBSCO Discovery Service (EDS). With EDS, Milligan College has created a strong library research platform with the speed and simplicity of a commercial Internet search engine, and has succeeded in making its library holdings even more accessible to students and faculty.

Because EDS applies a search query across a range of library resources and formats at once, it can bring to the surface information a student may not have otherwise discovered through conventional means. This brings a delightful element of serendipity to the research process.

In an effort to make its collection of library resources more readily available to students and faculty, Milligan College faced three major challenges.

First, multiple search entry points to the library’s various databases made the task of locating resources more difficult. “I think it is frustrating [for users] to have to re-initiate a search for each type of resource,” said Gary Daught, Director of Milligan College’s P. H. Welshimer Memorial Library. “We just knew in the back our heads that we wanted to make the library’s information and resources as accessible to our students as possible.”

In addition, Daught realized that students were using commercial search engines, such as Google, to locate information on the Web. However, he questioned the Web’s reliability for academic research purposes.

“Given a choice between digging hard for the best available information resources or the convenience of a Google search,” Daught said, “students are often satisfied with ‘good enough.’”

So he and his colleagues sought to leverage the familiarity that students have with commercial search engines and bring a similar user experience to the library. The goal was to help students find library-vetted resources as quickly and as easily as they would find information on the Internet. Daught said he had been watching the discovery service platform develop over the past few years. As he saw it reaching a level of maturity, he decided that it was “definitely a direction that we needed to take seriously.”

Finally, Milligan College had limited funds available to achieve its goal. With a fairly robust collection of library resources, Daught saw that helping students and faculty to discover what Milligan already had in its collection would be more cost effective than buying additional databases of content. “We have a lot of stuff,” Daught said. “We want our students and faculty to discover what we have.”

Daught was the primary catalyst behind implementing EDS, which launched on September 6, 2011, a couple of weeks after the fall semester began.

Daught and his colleagues evaluated several web scale discovery service options, but ultimately chose EDS. Since Milligan College was already an EBSCO customer, with a number of EBSCO databases among the library’s top resources, the decision was fairly easy. “Students were familiar with EBSCO’s look and feel, so when EDS came across with the same appearance, that was definitely a plus,” Daught said.

The full implementation process took around three and a half months, beginning in June 2011. By July, Daught and his colleagues were able to access EDS and exchange feedback.

Daught said he was also impressed by EBSCO’s level of responsiveness during the implementation process. “It was pretty smooth,” he said, adding that EBSCO’s technical support team continues to be readily available. “Whenever we encounter a problem, tech support is very responsive and tries to find a solution for us fairly quickly.”

Thanks to a widget builder on the EBSCO Support Site, they were able to embed code directly into Milligan College’s library website. The new search box was dubbed “MCSearch.” Daught designed a unique logo, incorporating the school colors of black and orange. The tagline reads, “One search box—for the good stuff.”

“We were glad to be able to put [in] a widget to access it directly from our website’s homepage so we didn’t have to direct them to another page or site,” Daught said. “I think just having that front and center made it really easy for folks.” 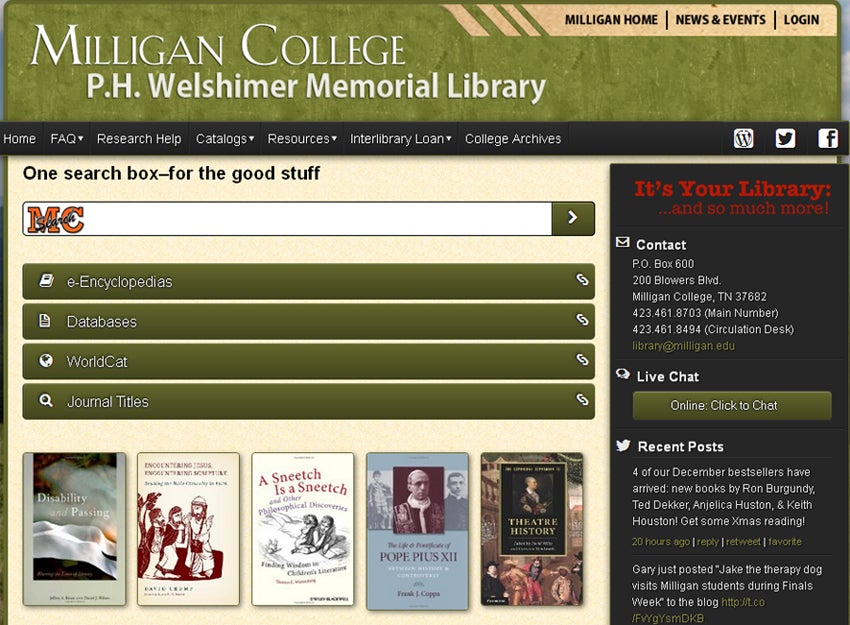 “We tightened the integration of the EDS widget in the overall design,” Daught said. “Our MCSearch box is prominently embedded on the page, and we think it translates very nicely on the mobile.” 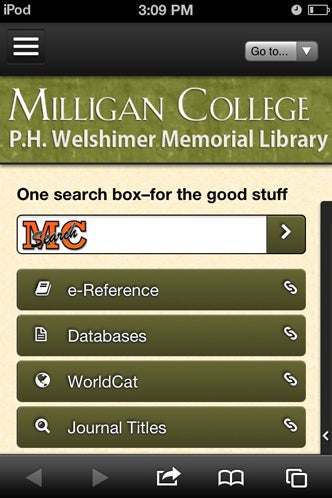 The library created advanced buzz about MCSearch by issuing a number of teasers around campus. Daught sent an email to faculty describing MCSearch and used the library’s Facebook and Twitter accounts to promote the new tool.

On the day of the launch, Daught erected signs along the college’s main walkway, which runs from the dormitories and cafeteria down to the library. The signs featured the MCSearch logo and tagline. He also wrote an announcement about MCSearch on the library website’s blog.

During the first week of the semester, Daught set up a demonstration table in the cafeteria lobby and handed out bookmarks informing students of the library’s new MCSearch tool. “We encouraged students to go in there and play around with it, hopefully before they had assignments,” Daught said.

In addition, the campus television station did a news segment on MCSearch, and a journalism student interviewed Daught for a college newspaper article. “Everyone’s really excited,” Daught said.

The library has also offered training on MCSearch. At the beginning of the fall semester, the Research and Instruction Librarian held a faculty workshop to increase familiarity with the tool. In addition, information literacy instruction sessions in the college’s freshman and sophomore composition classes now include an overview of MCSearch.

With EDS, Milligan College has launched a strong library research tool with the speed and simplicity of a commercial Internet search engine, as well as a tremendous array of vetted, professional content. Since users can now apply a single query simultaneously to the library catalog and databases, the library holdings have also become more accessible.

In addition, Daught said, the EDS platform generates more relevant search results. Since broad keyword searches are apt to return too many—sometimes disparate—results, users are forced to craft more precise queries in advance to get at the good stuff. With the power of EDS, users can limit their queries beforehand and then filter results even further after the initial search is completed. According to Daught, “This capability removes the ‘problem’ of too many results, while still providing the opportunity to discover valuable resources from unexpected sources.”

Daught believes that MCSearch is not about “dumbing down” the research process, or “pandering to the bad study habits of lazy students.” Instead, he said, MCSearch removes barriers. “Using a search engine effectively still requires skill and discernment,” he said. “But because MCSearch applies a search query across a range of library resources and formats at once, it can bring to the surface information a student may not have otherwise discovered through conventional means. This brings a delightful element of serendipity to the research process.”

Since launching EDS, Daught has been tracking visits to the library website using Google Analytics. “We embedded a widget to MCSearch on the library homepage, so increases in visits to the homepage can, at least in part, be attributable to MCSearch,” Daught said, adding that, within a few months, both visits and page views had doubled. “Our observation is that students have quickly adapted to it as a natural part of their library resource search routine.”

According to one MBA student, the MCSearch box has made the process of finding relevant information a whole lot faster. “When you work full-time and want to dedicate all the time you can to developing your ideas, this really speeds up the process of wading through volumes of information to get to the sources that are meaningful to your research.”

Based on statistics gathered in the fall of 2012, one year after implementing MCSearch, library usage is way up. The number of sessions has doubled, full-text retrievals have increased by almost 62 percent, and eBook retrievals are up by almost 29 percent.

“I’m prepared to attribute this increase to the surfacing of eBook content among the relevant MCSearch search results,” Daught said in January 2013. “If a student can access an eBook as easily as a journal article, then he or she may be inclined to using a monograph as a source in his/her research. While yet short of a trend due to limited historical data, this increase in eBook ‘circulation’ was one of my hoped-for goals for implementing a discovery tool.”