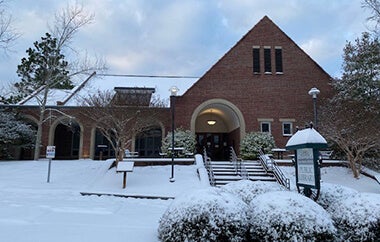 Southern Pines Public Library (SPPL) is a municipal library located in Moore County, North Carolina, that serves a population of more than 14,000. Featuring a vibrant downtown area of shops, restaurants and other individually owned small businesses, Southern Pines is home to an entrepreneurial spirit.

Recently, to spur further economic development, SPPL increased outreach to local small businesses and began offering special programs for budding entrepreneurs. EBSCO’s Entrepreneurial Mindset Training Course has played a key role in supporting this initiative, especially throughout the COVID-19 pandemic. Librarians have also learned that they don’t need to possess business expertise to have an impact on local entrepreneurship.

As with many public libraries, SPPL did not have a business librarian on staff. When librarians Laurel Holden and Mary Howard were tasked with implementing programming for entrepreneurs, they were initially apprehensive. But they quickly learned that the skills they already possessed, coupled with the pool of expertise they had access to within the business community, would help them succeed.

Howard, a former teacher who serves as SPPL’s collection development and acquisitions librarian, attended a training session to become a facilitator of the Entrepreneurial Mindset Training Course. The course is designed to be self-paced or integrated into library programming. Holden, SPPL’s programs and outreach librarian, took the lead on scheduling the first of what she hoped would be several events for entrepreneurs.

In September 2019, the Library hosted “Beyond Brick and Mortar,” a roundtable discussion of local entrepreneurs from diverse backgrounds who shared unique insights on starting their own businesses. To promote the event, Holden and Howard spread the word on social media and ran an announcement in the local newspaper. The event drew 30 people who asked the panelists questions that centered around the legal and financial aspects of owning a business (e.g., permits and taxes), the challenges they faced, and how they overcame them.

“There were a lot of people in the audience who were really interested in starting their own business, and they were coming here to try to glean some little bits that they could take away with them,” Holden said. “And then there were also people in the audience who were already a part of the business community.” The combination of people with various levels of business experience led to great conversation and networking opportunities.

“In addition to being a great community event, the roundtable sort of doubled as a launch for the course,” Howard said. “We introduced it there, just briefly, and offered some pamphlets for anyone interested in learning more.” Patrons began enrolling in the course in October 2019.

Not long after, the COVID-19 pandemic hit.

The skills you already possess as a librarian are all you need to start weaving entrepreneurship into your programs and services.

With in-person events on hold, Howard and Holden were grateful that they had chosen to offer the self-paced Entrepreneurial Mindset Training Course over the facilitator-led option. They promoted the course to not only library patrons, but also town employees. So far, 40 users have requested access to the course, and several have kept in contact with Howard and Holden.

In September 2020, SPPL hosted “The New Normal,” a virtual roundtable in which members of the local business community discussed their response to the COVID-19 crisis. Panelists included a representative from Moore County Chamber of Commerce, a couple who started a landscaping service to employ those laid off during the pandemic, and the director of a local food pantry who had to change distribution processes in the face of a huge spike in demand.

“I think one of the best things about both roundtable events is that when you put all these people in a room together, they're coming up with ideas that benefit one another,” Holden said. “So definitely, they all had a lot of things in common, even though they came from such different backgrounds.”

One young woman who completed the Entrepreneurial Mindset Training Course through SPPL during the pandemic was Lara Beth Jones, a licensed occupational therapist and certified nature and forest therapy guide. Jones was looking to start a forest bathing business to promote wellness and mindfulness in the community. For the uninitiated, the Japanese exercise of forest bathing (shinrin-yoku) sees practitioners immerse themselves in nature to reduce stress, alleviate anxiety and depression, improve sleep, increase feelings of gratitude and more.

Jones said she found the Entrepreneurial Mindset Training Course to be motivating. “[It] provided inspiration and evidence that anybody can be an entrepreneur, as long as they see a need and have a particular solution,” she said. “I loved how it featured relatable people sharing their stories.”

Jones said SPPL provided a “community of support” for her as she navigated uncharted waters. Howard frequently checked in while Jones was taking the course, and Holden partnered with Jones to offer forest bathing sessions to SPPL patrons during the summer of 2021. Holden said the sessions were a perfect addition to the library’s pandemic programming because they were held outside and addressed the mental health needs of participants. Jones has since contracted with the Southern Pines Recreation and Parks department to host an ongoing series. She also leads walks in partnership with the Village of Pinehurst.

“Working with SPPL was like a jumpstart for my business,” Jones said. “I don't know where else I would have gotten that support, and I really took heart [in knowing] that the library is supporting the work of entrepreneurs in the community. Plus, partnering with the library added some community validation to my concept, which is key when marketing something new that many people may never have heard of before, such as forest bathing. They have been a fantastic resource for me, and I can't thank them enough!”

Both Howard and Holden said the work they’ve done to support entrepreneurs has given each of them newfound confidence and perspective.

Howard said she has developed a better understanding of the mindset needed to succeed in an ever-changing economy and greater appreciation for the small business owners in her community. “I’m eager to learn more about their stories and better understand how our library can effectively support their needs,” she said.

For Holden, the work has underscored the value of relationships. “I find that I’m always looking for opportunities to connect people with other members of the community and to provide experiences that allow them to creatively engage with the library,” she explained.

Both acknowledge that librarians without business expertise might feel ill-equipped to support their community’s entrepreneurs.

“This is a completely rational concern and fear,” Howard said. “However, we don’t seem to have the same reaction when we create programs around other focus areas, do we? We don’t pass on hiring the magician for a kids’ program because we aren’t magicians or say, “No way!” to the orienteering class because we couldn’t teach it ourselves. Librarians across the country let the experts run the show, and that’s exactly what Laurel and I have done here at SPPL.”

Holden agreed, adding that the community is a library’s best resource. “You certainly don’t have to know everything about business, but you do have to be willing to talk to people and find those meaningful partnerships,” she said. “The skills you already possess as a librarian are all you need to start weaving entrepreneurship into your programs and services.”

Learn how the Entrepreneurial Mindset Training Course can help librarians — and the innovators in their communities — get started on the path to success.